HopeNow’s projects aim to find and identify persons who are/have been victims of human trafficking to ensure that the target group has the correct information and knows about the help and support given to them by the Danish State.

HopeNow is mandated to carry out outreach work in the streets, prisons, and asylum centres. We are a central actor in the Danish Government’s National Action Plan to Combat Human Trafficking for 2022-2025.

Since 2011 HopeNow has been an ongoing and respected partner under The Danish Action Plan to Combat Human Trafficking. Since 2019, HopeNow has had a greater focus on male victims.

HopeNow submits an annual status report to the Department of Gender and Equality within three years. HopeNow submits a final and more extensive report with conclusive goals and results by the end of each project.

In 2019, HopeNow held a small conference to share further and disseminate knowledge regarding different methods and approaches also presented by other organisations.

The project was evaluated by COWI.

During the project, HopeNow found and identified 69 women whom HopeNow referred to healthcare, provided with trauma therapy and legal counselling, often in close cooperation with partners here in Denmark. Two of the trafficked people in the project returned to their country of origin with a voluntary return.
Many of the women HopeNow had met through the project HopeNow remained in contact with and continued to provide various forms of support. HopeNow’s aim is for them to become empowered enough to rebuild their lives.

The following is a comment from a woman trafficked into escort work:

“I met HopeNow staff in 2017 when I was doing escort work. At the time, I had just accepted my terrible life in forced sex work. When I first met HopeNow, I did not know what trafficking was. I was so sad, had terrible dreams, and was confused. But ongoing trauma therapy and good counselling allowed me to get a hold of my life, finish with my traffickers and find solutions so that I could rebuild my life.”

From 2016 to 2018, HopeNow carried out a 3-year outreach project funded by the Department of Gender and Equality. The project focused on human trafficking in escort and private prostitution. We aimed to develop new methods to reach this hidden group of trafficked women. HopeNow explored the use of the internet in prostitution and addressed the challenges at the national level.

As well as using technical solutions such as web scraping in our outreach work, HopeNow employed a peer group worker (a previously trafficked woman). HopeNow trained this person to work closely with HopeNow’s cultural mediator, who has decades of experience providing social services and trauma therapy to trafficked people with ethnic origins in Africa. 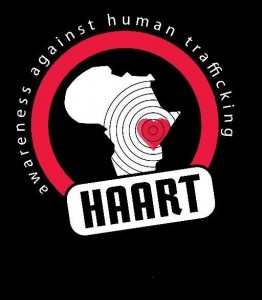 Between 2014 and 2018, HopeNow completed two projects funded by CISU and the Kenyan anti-trafficking NGO called HAART.

HopeNow’s previous work inspired the projects in identifying and providing services for many women trafficked to Denmark from East Africa. Some of these women motivated HopeNow to make a project in Kenya, which would train previously trafficked women to be spokespeople to talk to the local people about human trafficking.

HopeNow made a field trip to Nairobi, followed by the first pilot project with HAART, launched in 2014. It included a group of 6 trafficked women who were trained in how to tell their narrative stories. HAART staff trained in communication and social workers accompanied the women out to the villages, schools and slums to increase awareness about human trafficking. Two psychologists also joined the project to empower and support trafficked women.

Between 2016 and 2018, HopeNow continued collaborating with HAART and further developed the project. The aim was to engage in targeted work with the local authorities in Kenya, build information and awareness campaigns in local communities and build capacity among the people working in this field in Kenya. There was also focused on developing best practices to rehabilitate and empower survivors of trafficking.

HopeNow is very happy that HAART has continued to grow and now has a shelter and is instrumental in campaigning against human trafficking in Kenya – also improving the lives of victims of trafficking in the country through their legal work.

This website uses cookies to improve your experience while you navigate through the website. Out of these, the cookies that are categorized as necessary are stored on your browser as they are essential for the working of basic functionalities of the website. We also use third-party cookies that help us analyze and understand how you use this website. These cookies will be stored in your browser only with your consent. You also have the option to opt-out of these cookies. But opting out of some of these cookies may affect your browsing experience.
Necessary Always Enabled
Necessary cookies are absolutely essential for the website to function properly. This category only includes cookies that ensures basic functionalities and security features of the website. These cookies do not store any personal information.
Non-necessary
Any cookies that may not be particularly necessary for the website to function and is used specifically to collect user personal data via analytics, ads, other embedded contents are termed as non-necessary cookies. It is mandatory to procure user consent prior to running these cookies on your website.
SAVE & ACCEPT